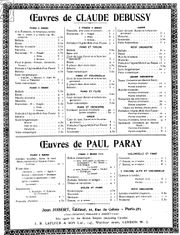 This firm was founded in Paris in 1921 by Jean Jobert, who bought the business of his previous employer Eugène Fromont, and started with an impressive catalog, especially of early Debussy, include some "goldmine" works such as Clair de Lune. However, later Debussy was published by Durand. This solid basis allowed him to risk launching new composers such as Maurice Delage, Manuel Rosenthal and Paul Paray.

In 1957, Jean Jobert handed the firm to his daughter Denise Jobert-Georges. She took an interest in the Royan festival and published 400 works by composers such as Maurice Ohana, Alain Banquart, Hugues Dufourt, Emanuel Nunes and Philippe Boesmans. The new owner expanded the firm by acquiring les Editions Costallat (Baroque works, and Berlioz from the earlier acquisition of Richault (1898)) and les Editions Musicales du Marais (critical editions of Franck, Bizet, Chausson, Saint-Saens and Chabrier) in 1995.

Tristan de Celeyran replaced his grandmother Denise Jobert-Georges in 1998 and modernised the firm, forming an interactive section named Cig-art. New composers were recruited: Thierry Blondeau, Dominique Lemaitre and others. Since 2007 Pierre Lemoine has been the director.