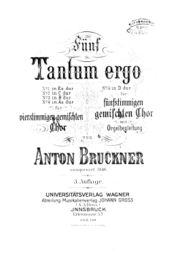 This firm operated from 1882 in Innsbruck in the Austrian Tirol. It published mainly sacred music for use in (Roman Catholic) country churches. There were two series of church music: Johann Höllwarth's Leicht ausführbare Kirchen-Musikalien and Johann Obersteiner's Der Land-Chorregent. The firm also published several vocal works by Anton Bruckner (Mass in D minor, Ave Maria, Tantum ergo) and marches and dances for piano.

Johann Gross's imprints either appear without plate numbers or with ones that appear in one of the following formats: ##, J.G.R. ###. Dates in italics are estimated.