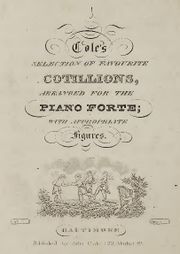 John Cole (1774 - 1855) was a British-born American music printer, publisher and composer based in Baltimore.

Born in Tewkesbury, England, he emigrated to Baltimore in 1785 with his family. He compiled nearly thirty different collections of sacred music for various church denominations. In 1802, he became a printer; several of his publications included compositions by him. In 1822 he opened a music shop, which became the most important seller of sheet music in Baltimore, and he worked as a music publisher until 1839. In 1862, his firm was purchased by William Miller and Joseph R. Beacham, who renamed it Miller & Beacham.