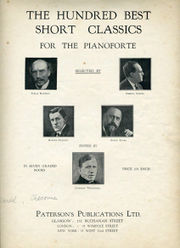 Paterson's of Glasgow is synonymous with bagpipe music. The firm started as an instrument maker Paterson Mortimer & Co in 1819, and began publishing as Paterson Rey & Co in 1835. By the end of the century it had many branches and had built up a general catalog. However, in 1925 they bought the catalogue of Logan, J Marr Wood Ltd of Inverness, which had been active in bagpipe music publishing from 1840 to 1923. In spite of its Scottish connections, Paterson's is best known to the average British amateur musician as the publisher of Hundred best short classics for piano.
It was bought by Chester/Novello in 1984.