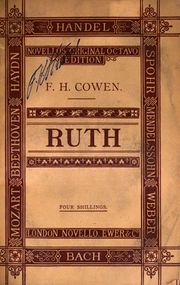 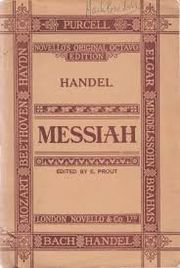 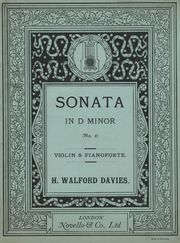 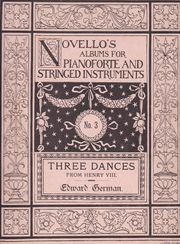 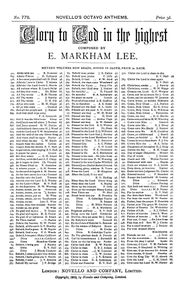 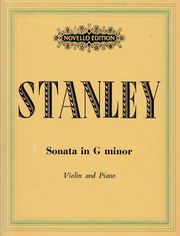 Novello is one of the world's longest-running publishers of choral music. Its most famous series is the "Novello's Octavo Editions" series, published from the 1830s to the present.

The company's origins date to 1811 when Vincent Novello published A Collection of Sacred Music as performed at the Royal Portuguese Chapel. The publishing enterprise was under way in earnest when Novello and his son Alfred (1810-1896) opened a shop in London's Soho district in 1829. Alfred soon realized the value of making standard works available in inexpensive editions, which in turn enabled the rapid growth of chorus and singing societies throughout England. The firm expanded rapidly with the publication of popular choral collections such as Novello's Choral Handbook, a collection of music printed in separate parts. and Singing for the Million. (by Joseph Mainzer, 1801-1851 pub 1841). By 1836, Novello was able to issue an octavo vocal score for Mendelssohn's oratorio St. Paul at a price so low that competing publishers could not believe this was possible.

In 1844, Novello launched the periodicals The Musical Times and the Singing Class Circular, which included at least one new choral work in octavo format. These proved so popular that the octavo format was soon established the one most often used for choral music and vocal scores - a practice which continues to the present day. By 1847, Novello established their own printing facilities. Using an improved version of moveable type for musical notation, the choral series known as "Novello's Octavo Editions" was established. Along with thousands of choral works by Mendelssohn and other contemporary composers, vocal scores for Handel's operas and oratorios were issued. Towards the end of the century Novello published many instrumental works by Elgar, Coleridge-Taylor, Davies, Parry, Bantock and Stanford, in addition to series for amateurs such as Novello's Violin and Pianoforte Albums and Novello's Pianoforte Albums.

Absorbed firms include Coventry & Hollier (1849-1851), Ewer (1867), Elkin & Co. (1960), Goodwin & Tabb and W. Paxton & Co. (1971). Novello was finally bought out by Music Sales, Ltd. in the 1990s and merged with Chester and Hansen. In 2018 Music Sales (now known as Wise Music Group) sold its printed music division to Hal Leonard of the US, explaining the move is this announcement: “Printed music has played a special role in the long history of Music Sales, but our direction of travel has been very clear in recent years as we continue the expansion of our portfolio of copyrights in all styles and genres across the world.” Hal Leonard now claims to be the world's biggest music publisher.

Novello's plate numbers are in the following format: ####. Dates in italics are estimated.