Now exists in an Amadeus-Verlag (2003) reprint. May have been published first by C.F. Kahnt of Leipzig before this Augener 1901 English edition. 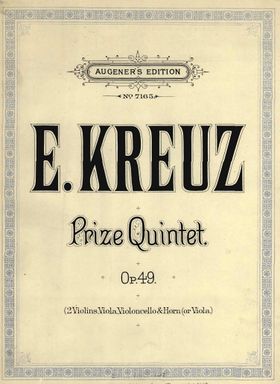 Contemporary review The Musical Times April 1st 1901: At his concert on February 28, at Steinway Hal, Mr. Kreuz produced his own Quintet....which recently gained the prize in a competition organized by Mr. Lesley Alexander. It was excellently played by the Gomperz quartet....and Mr. Borsdorf. Mr. Kreuz treats the horn very kindly...The Quintet is a solidly written, but melodious work, German in feeling, but not unoriginal. Its expressive Romance is perhaps its most satisfactory movement, while there is much freshness in the last Allegro molto moderato, which is remarkably restrained throughout, and ends in an unexpectedly subdued way. (The first British performance of Arensky's Piano Quintet Op. 51 was given at the same concert.)

Prize Quintet: May have won the Lesley Alexander Prize in 1900?