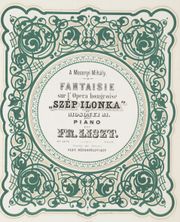 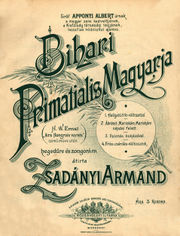 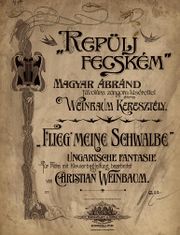 Rózsavölgyi was Hungary's most prestigious music publisher for 100 years. The firm was founded 1850 in Pest by Gyula Rózsavölgyi (1822–1861), the son of composer Márk Rózsavölgyi (1789-1848), and Norbert Grinzweil (1823–1890). The new firm rapidly established connections and agencies with other music publishers in Austria, Germany, France and England. Growth was accellerated by the acquisition of the smaller publishers József Wagner (in 1858) and Treichlinger (1874).
In the last quarter of the 19th century the firm continued to prosper. After Rózsavölgyi's death, János Nepomuk Dunkl joined as partner, and they opened a branch in Vienna. A subsidiary activity was concert promotion; for example, in 1873, Rózsavölgyi & Co. was promoting concerts of new music known as Concerts populaires.

By 1900, the firm was easily the largest of its type in Hungary, with a catalogue containing works of nearly all Hungarian composers of the era including Erkel, Liszt, Mosonyi and Robert Volkmann. In the first decades of the 20th century, new Hungarian composers such as Bartók, Kodály, Dohnányi, Weiner, Lajtha and others were added to the catalogue. The firm's chief competitor, Rozsnyai Károly, was finally absorbed in 1936. Rózsavölgyi was finally nationalized in 1949, and renamed as Editio Musica Budapest.

Until Rózsavölgyi's death, the letter prefixes/suffixes used were: R. et C., R. et Co., R. és T.Sz. (and variants). After 1862, Grinzweil’s initials were also used from time to time: G.N., N.G., G.No.N., N.G.Sz. Initials were dropped from 1870 to 1885, but from that year forward the old R. & C., R. & Co., R. és T. made their appearance again. There are cases where the same number is employed for two completely different pieces, so numbers cannot be considered a reliable means of dating things.
Dates in italics are estimated dates.