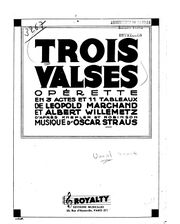 In an attempt to break Salabert's monopoly on musical comedy publishing in 1920s Paris, a group of theater directors under Albert Willemetz (1887—1964) set up this firm. It later joined Chappell and is known as les Editions et productions théâtrales Chappell, a group including Chappell, Royalty and Joubert.