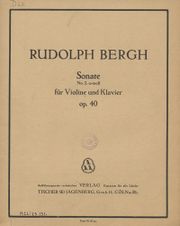 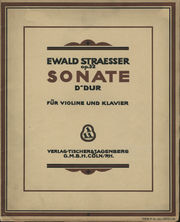 This firm was active in Cologne from 1910 until ca.1923 (see below), publishing mainly contemporary composers and some Baroque works (Pergolesi, Pisendel, Biber). Most of the items in the catalog were songs, piano pieces or chamber works, but there were some orchestral works and concertos.
The best known contemporary composers were Schoenberg (Friede auf Erden, Op.13, 1912), Pfitzner, and Delius. At the same time, many works of the following less well-know composers are found in the catalog: Julius Weismann, Ewald Straesser, Justus Hermann Wetzel, Walter Courvoisier, Waldemar von Baussnern, and Rudolph Bergh.
The firm also published, in 1928 and 1929, most of the early works of two composers whose works will not be PD for a long time: (Opp.3,5,8,11) of Karl Marx (1897-1985), such as his double violin concerto, Op.5, and Opp.3 to 11 of Hans Wedig (1898-1978) such as his piano concerto, Op.7 and Passions-Kantate, Op.6.
The imprint is now owned by Musik-Kral of Mauerkirchen (near Linz in Austria), a publisher of folk music especially for the zither, which also owns the imprints Fr. Portius, Bachschmid, E. Bauer, JLG Grimm, and Zinneberg.

Purchased by Wunderhorn-Verlag sometime before 1923, though as an imprint they continued to be used until 1941 if not later. Entries in this table after 1923 or so should be moved to that publisher, and publisher links on pages should be redirected (as with similar cases Schlesinger --> Robert Lienau, &c&c&c.)