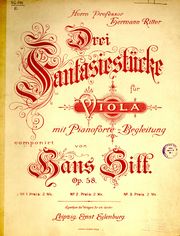 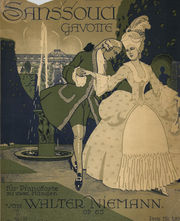 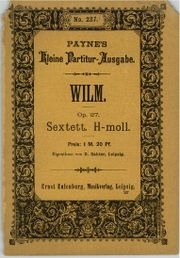 Founded in 1874 by Ernst Eulenburg (1847-1926) in Leipzig, Germany. For the first two decades, his catalog consisted mostly of educational and choral works. Subsequently, Eulenburg purchased the study score series of the Leipzig publisher Payne (1891) and that of the London publisher E. Donajowski (1894) to form the basis of the well-known miniature score series - Eulenburg's Kleine Partitur-Ausgabe.

Ernst's son Kurt joined the company in 1911 and took over the reins after his father's death. With the increasing brutality of the Nazi regime in Germany, Eulenburg abandoned the Leipzig headquarters in 1939 for the London office, which became the new company headquarters. In Leipzig the firm, like Anton J. Benjamin and Josef Weinberger was confiscated in 1939 under the Nazi aryanization policy, and became part of F.E.C. Leuckart.

All plate numbers for the study score series, which forms the vast majority of the Eulenburg catalog, begin with the prefix. "E.E." Several hundred Eulenburg titles were actually reprinted from study scores originally issued by the publishers Payne and Donajowski, which were sold to Eulenburg in 1891 and 1894 respectively.

While most Eulenburg study scores are actually re-engraved, some are simply licensed reprints from other publishers. A number of study scores were apparently issued concurrently by C.F. Peters starting in the 1920s. Eulenburg frequently issued prefaces by several different authors and editors over the years for the same work without changing either the edition or plate number. Edition and plate numbers would remain the same even if the works was re-engraved fresh (Beethoven: Symphony No. 9, for example).

Although some prefaces are public domain due to natural expiration of copyright term, others may still be protected, even if the music itself is public domain. Eulenburg's plate numbering scheme is apparently not in any chronological order, but serves simply as an identifier for a particular publication.
The "Payne" study score series is often specifically listed in Hofmeisters' Monatsberichte with its edition number specified.
Plate numbers with the E.E. prefix (includes study score series). All listed items are scores unless noted otherwise. Estimated dates in italics.