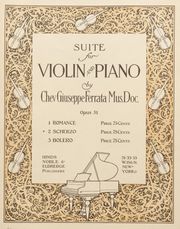 Arthur Hinds and Gilbert Noble started a bookstore in New York in the 1890s. In 1904 they merged with Eldredge of Philadephia. Hinds and Noble continued as a bookseller, becoming Barnes and Noble later in the century. Hinds, Hayden & Eldredge published music among other items.

Hinds, Hayden & Eldredge's catalog contained many light piano works such as Friedrich Baumfelder's Lorelei, Op.408 and Carl Wilhelm Kern's Dancing on the Lawn, Op. 298. No. 2.,as well as many songs by Ernest Richard Kroeger (1862—1934) and several works by Giuseppe Ferrata (1865—1928). However, the firm's greatest music publishing success was the The Most Popular series of music books (ca.1905-1920). This series was in competition with Appleton's contemporaneous The whole world series.