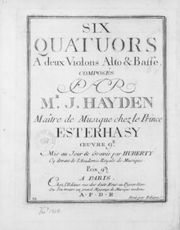 Anton Huberty (ca.1722-1791), a virtuoso viola d'amore player and composer, started this firm in Paris in 1756 and is chiefly known as a music publisher. He also played double bass in the orchestra at the Paris Opera. Around 1770 he moved to Vienna and is credited with introducing the process of metal music engraving to that city. Although he opened his own firm there in 1777, it could not compete with Artaria, and from 1781 Huberty was reduced to working as an engraver for his competitor. His collection of music for viola d'amore, Neu method-messige viol d'amor stüke, long considered lost, was discovered to be at the Sibley Library, Eastman School of Music in New York. The collection contains music by Huberty and other composers. Based on the difficulty of this music, it can be surmised he was a gifted player of the instrument.