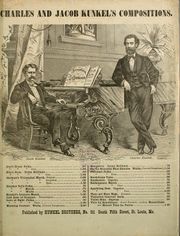 Engraving of Jacob and Charles Kunkel.

The music publishing firm Kunkel Brothers was established by the German-born brothers Charles Kunkel and Jacob Kunkel in St. Louis, Missouri in 1868. The brothers were concert pianists both having studied with Louis Moreau Gottschalk and Charles having also studied with Sigismond Thalberg. The firm published many of the brothers' own compositions under their own names and under various pseudonyms. Other midwest composers whose work the firm published included Julia Rive-King, Robert Goldbeck, and Ernest Richard Kroeger. After Jacob's death in 1882 Charles became the sole operator of the firm which apparently did not survive his own death in 1923.

In September, 1878 Kunkel Brothers began publishing their monthly magazine Kunkel's Musical Review. Each volume contained a significant amount of music (over fifty pages by 1899) in full sheet music size. Publication of the journal ceased with volume thirty-two in October, 1909.

Plate numbers for Kunkel Brothers were issued in a fairly chronological fashion and are in the format ####. Compositions printed in Kunkel's Musical Review apparently carried no plate numbers.