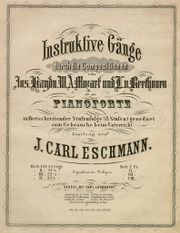 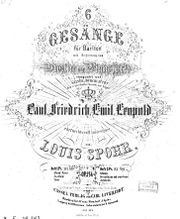 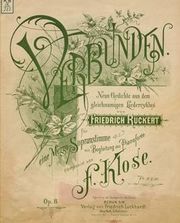 Friedrich Luckhardt (not to be confused with Leuckart, another publisher) was born in Kassel in 1848, the son of Carl Luckhardt, who operated a business which was founded in 1763, publishing and selling books and music. He served an apprenticeship from 1862 with Hannemann in Rastatt, then entered the family firm. On his father's death in 1867 the young man took over the firm. He was an energetic businesssman, building his firm so that by 1887 it had over 150 employees, publishing books (including Riemann's on music), and newspapers such as the Deutsche Heereszeitung and Deutsches Tageblatt. Luckhardt sold the music publishing interest to Raabe & Plothow in Berlin in 1889.

In the Kassel period the catalog contained many eminent composers of the day: Spohr (first publisher of his string sextet op.140 in 1850), Reinecke, Schumann, Julius Weissenborn, along with violin arrangements by Friedrich Gustav Jansen Jean Joseph Bott and Carl Rundnagel, and folk song arrangements by Johann Carl Eschmann. In the Berlin period it mainly published songs.

Another firm of the same name operated in Stuttgart: Luckhardt's Musik-Verlag (J. Feuchtinger). This was bought out by Heinrichshofen's Verlag in the early 20th century. (It does not seem to have been related to Feuchtinger & Gleichauf of Regensburg.) HMB also lists Luckhardt and Belder in New York from 1899.

Luckhardt's plate numbers were issued in a regular chronological fashion. Plate numbers are in the format of C.L. #### (Kassel) or F.L. #### (Berlin). Dates in italics are estimated.