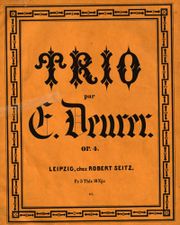 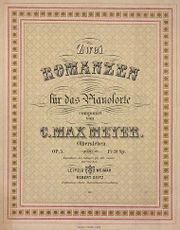 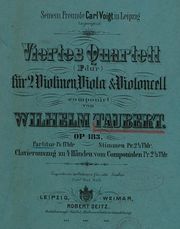 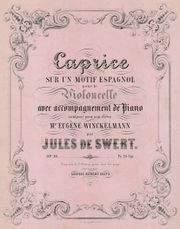 This Leipzig firm had a short but frenetic existence between 1864 and 1884, with 365 publications being noted in Hofmeister's Monatsberichte. It published piano music, songs, choral works and chamber music by nearly every second-tier composer of the period (from the 21st century point of view): Julius Rietz, Ferdinand Hiller, Wilhelm Taubert, August Klughardt, Joachim Raff, Carl Reinecke, Franz Paul Lachner, Eduard Lassen, Franz Abt and Theodor Herbert's operatic fantasies for piano. It also co-issued several works by Camille Saint-Saëns, such as the Piano Quintet Op. 14 and Piano Trio No.1 Op.18, that were initially published in Paris, in 1868.

With the exception of two annuals published in January of 1883 and 1884 Seitz's last publication to be mentioned in Hofmeister's Monatsberichte appeared in the December, 1882 issue. Hofmeister's Handbuch (1887) notes that the firm was declared bankrupt on February 16, 1885 with all the rights of the company passing to Emil Gründel.

Incidentally, it has been said on this site that its stock was sold to Ries & Erler in the 1880s, but the Ries and Erler web site does not mention this. Furthermore, what relation, if any, Robert Seitz had with the music publisher also named Seitz located in Coburg (ca.1896-?) is not known.

Seitz's plate numbers were issued in a regular chronological fashion. Plate numbers are in the format of R.S. ####. Dates in italics are estimated.