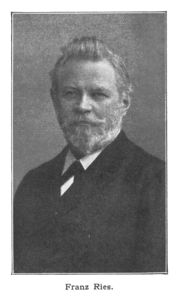 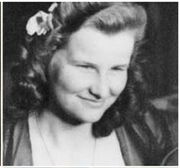 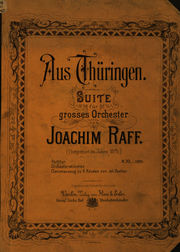 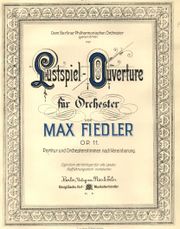 The new firm’s first successes were Heinrich Hofmann's opera "Ännchen von Tharau" and Hermann Fliege's "Circus Renz-Gavotte". Franz Ries put some of his own works in the catalog: the ever-popular violin pieces "Perpetuum mobile" from Suite No.3, Op.34 and "La Capricciosa".

From 1942 on the latter's two daughters, Waltraud and Ingrid, became proprietors of the publishing house. Waltraud especially worked with great dedication to learn the business, at first relying on colleagues because of her youth and lack of experience, and abandoning plans to enter university.

During the last days of World War II the home of the company on the Kurfurstendamm in Berlin was destroyed in the battle for Berlin, on May 1st 1945, and 60 years of archives and plates perished. Many similar firms never restarted, but Waltraud had the vision and determination to rebuild the firm she loved, obtaining a business license in 1948, and starting by reprinting favorite titles.

Popular music was not forgotten, especially with the acquisition of Wilke & Co. Berlin, so that alongside new works by Hans Bund, Hanns Kallies, Edmund Kötscher Willi Löffler and others, new arrangements of pre-war favorites by Jo Knümann and Josef Rixner were published.

After Waltraud Ries's death in 1968 Ingrid Meurer, Waltraud's sister, continued with the business. In 1997 her son Andreas Meurer took over the publishing house.

In the 1990s the company bought the contemporary E-Musik publisher Edition Corona, Berlin (1993) and the long-standing Berlin publisher Hermann Löffler(1997). Today the company's focus is among others on contemporary music, educational works especially for the violin (Carl Flesch, Zakhar Bron, Ramin Entezami),along with music for children and family use, and symphonic music of the 19th century. An unusual speciality is music for silent films.

(A note on founding: there are several sources which say of this or that score, "Published by Robert Seitz (date before 1881) (later Ries & Erler)", etc. at least strongly suggesting that Seitz's catalog was purchased by Ries and Erler when they began their joint concern or sometime in that vicinity; it would be interesting to know the details.)