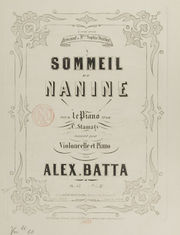 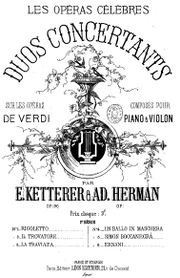 The firm was founded in 1842 by the brothers Escudier, Marie (1819-1880) and Léon (1821-1881). Having founded La France musicale in 1837, the publishing firm developed as a natural outgrowth; before founding their own firm, the periodical included issues from Troupenas and Richault as "bonus" material. Around May 1842, the Escudiers switched to their own issues; by October, they had passed plate #100. By 1853, Marie dropped out of the business, and the imprint used from then on was the name of Léon exclusively. In 1860, Marie formally split, taking La France musicale with him. Léon started L'art musical in the meantime. It was eventually sold to Girod, but stopped publication in 1894, having been sold again to Leduc.

The Escudier firm, like their journal, was mainly concerned with publications of operas, including the first edition of Don Pasquale in 1843. In 1844, piano works of Alkan, Liszt and Franck were added to the catalogue, as well as a vocal score of I Lombardi. The firm eventually published 20 operas in full score, no mean feat in that time. All of Verdi's works were included in the catalogue, at least supposedly. The plate numbers extended to over 3600. Verdi and the journals were its most significant contributions. They helped crown Verdi as the king of Italian opera in Europe.

The brothers Escudier were well-educated and knew a great deal about music; in 1844, they published a Dictionnaire de la Musique which was of great usefulness, accomplishing a function not examined since Brossard and Rousseau. Other books included a biography of Rossini. In 1882, after Léon died, the firm was sold to Heugel.