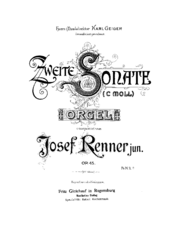 Fritz Gleichauf (1863-1937）was a typical Regensburg publisher; he published Catholic church music, he combined publishing with a retail business, and he bought and sold his businesses in the same city.

Starting as a partner in Feuchtinger & Gleichauf from 1891, he became sole owner after Franz Feuchtinger’s departure in 1900. He immediately sold the publishing side of Feuchtinger & Gleichauf to Adolph Stender of Johann Georg Boessenecker, but kept the retail shop. Then (still in 1900) he founded his own firm Fritz Gleichauf, which published a wide variety of light music and church music, and he was proud of winning a prize at the St. Louis World’s Fair in 1904, the highest distinction awarded to any German music publisher. A typical publication of this time was: Messe in B dur : für vier Männerstimmen mit orgel (streichquintett ad lib.) : Op.68 by Johannes G. Meuerer.