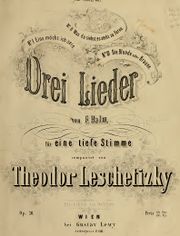 Gustav Lewy (1824-1901) operated his firm in Vienna from 1854 to 1897, when it was bought by Josef Weinberger. It had the title K. k. Hofmusikalienhändler It published mainly operettas, piano pieces (dances and salon pieces) and solo songs. The main composers were: in the 1860s and 70s Flotow, Hiller, Rubinstein, Esser and Brüll; in the 1880s and 90s Millocker, J.E. Hummel, Czibulka and Ziehrer. In addition to publishing, Lewy managed the oldest theatrical agency in Austria. Emil Hertzka (1869-1932), from 1907 a very important figure in the history of Universal Edition, worked for Lewy in the 1890s.

Not to be confused with Heinrich Lewy of Munich who published opera vocal scores by Braunfels and others in the early 1900s.