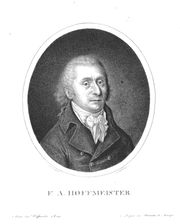 Franz Anton Hoffmeister (1754-1812), besides being a composer, is also one of the founders of music publishing in the city of Vienna along with the firms Artaria and Christoph Torricella. Hoffmeister commenced his publishing activities in 1783 with the issue of two sets of symphonies and some chamber music printed in Lyon by Guera. This was followed by an advertisement in the Wiener Zeitung in January of the next year announcing his plans to publish all of his own works at his own expense, for sale at a local bookseller. This was supplanted with a larger advertisement in 1785 with the planned issue of symphonies by Haydn, Mozart, Pleyel, Vanhal and others (plus his own) all to be sold from his own address.

The new firm saw a considerable burst of activity over the next few years, but by 1791 Hoffmeister's increasing composing activities resulted in a much reduced rate of new issues - despite grandiose announcements in the Wiener Zeitung of new type, new employees, etc. Between 1790 and 1793, Hoffmeister sold a number of items from his own catalogue to his rival Artaria, which has resulted in considerable confusion over issues of this era as some transfers took place as the work was being engraved, so that sections of a given item might be engraved by Hoffmeister, with the remainder being engraved by Artaria, and the hybrid edition sold by both firms with its own title page and imprint.

With a catalog of 293 items by early 1793, the firm's greatest extent was reached. The remainder of the decade saw only about 10 new issues. Hoffmeister seems to have been more talented at promoting his business than in operating it. He made frequent trips to other cities (Linz, Leipzig, Heilbronn) and was very adept at negotiating publication terms with composers of the caliber of Mozart, Haydn (both Joseph and Michael) and the young Beethoven, whose famous Pathetique Sonata was first published in December 1799 only to be assigned to soon after to Joseph Eder. By December of 1800, Hoffmeister was again in Leipzig to arrange a concert tour when he formed a partnership with the local organist Ambrosius Kühnel, known as the Bureau de Musique, later known as C.F. Peters and remained in Leipzig for the next 3-4 years.

The Vienna enterpise continued to operate in this time, but new issues were few, with the very last one appearing a year after Hoffmeister's return from Leipzig (1806). By 1807, the catalogue - with many items already duplicated in the newly formed Leipzig Bureau de Musique - was transferred to the Chemische Druckerey (Magasin de l'Imprimerie chimique) owned by Sigmund Anton Steiner. Steiner could very well be the person who operated the Vienna concern from 1802-1805, as a number of items were issued simultaneously by both concerns in the period of Hoffmeister's time in Leipzig.