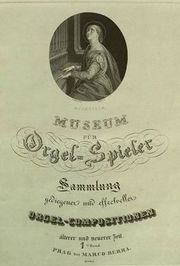 Pietro Marco Giulio Berra (1784-1853) is the father of Czech music publishing. After working for Artaria in Vienna, he founded his own business in Prague in 1811. It was no accident that this coincided with the opening of a music conservatory there. The firm engaged in music publishing, and also trading in musical instruments, artistic prints and oil paintings. From 1835 it also had a sheet music hire business.

Because his son-in-law Jan Hoffmann had started a competing business in Prague in 1841 (some sources say 1838), Berra decided that his own firm should be sold after his death, and thus it passed into the hands of Christoph & Kuhé in the 1850s. Finally in the 1880s it was again sold to Jaromír Hoffmann (Jan Hoffmann's son).