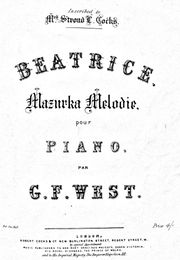 This London firm was founded in 1823 and was active until its purchase by Augener in 1904.

The major part of its catalogue was popular piano pieces. There were several series, such as Standard classical pieces for the pianoforte. Henri Bertini's (1798-1876) studies were important, such as 25 preparatory studies for small hands, Op.100 (1845).

Organists were well served with items such as C.H. Rinck's celebrated practical school for the organ : in VI books 10th ed. by Christian Heinrich Rinck, (1770-1846). (1850) There was also the Collection of organ compositions, ancient and modern (1870s, 12 volumes).

Another large series was the glee collection Vocal harmony : a collection of glees & madrigals compiled from the most celebrated English authors, with a variety of new pieces written expressly for this work, in at least 5 volumes (1860s) edited by William Horsley (1774-1858).

One unusual publication was an early edition (before Jensen or Dolmetsch) of Corelli's Violin Sonatas, Op.5, in 1849.

At the end of the century Cocks published a magazine The new quarterly musical review which lasted only three years (1893-1896).

the "A" in 958A throws the date off- it uses the same plate number as their (or someone's?) publication 958, it seems, adding A for "arrangement".