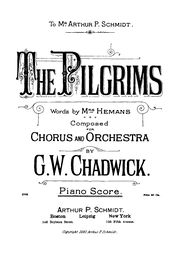 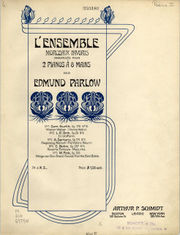 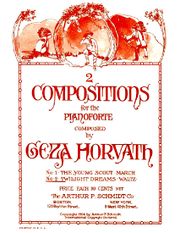 Arthur P. Schmidt (1846-1921) opened a music shop and publishing house in Boston in 1876 - not long after his arrival from Germany. The retail part of the business was sold thirteen years later. He was notable for his support of many American Composers; including members of the New England school such as Amy Beach, George Whitefield Chadwick, Arthur Foote, John Knowles Paine and Horatio Parker along with a great portion of MacDowell's œuvre. Among other achievements, Schmidt was the first American Publisher to publish an American symphony, Chadwick's Symphony No.2, in 1888. The company was acquired by Summy-Birchard in 1960.

Schmidt plate numbers were issued in a fairly regular chronological fashion. Many include the prefix "A.P.S.", though study scores sometimes employed a simple "S." Other issues appeared without any prefix. Some plate numbers include a number after a hyphen that refers to the number of music plates for the particular work. Some works, perhaps because they were coproduced, occurred with other plate prefixes (e.g. C., for a work that was published in co-ordination with August Cranz.)