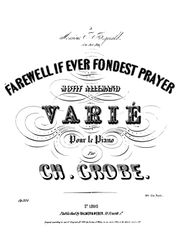 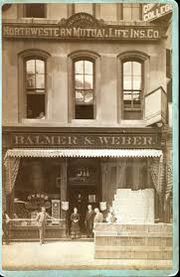 The premises before moving to 1004 Olive St. 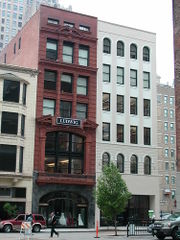 Balmer & Weber published music in St. Louis from 1850 to 1907. It was founded by two first generation Americans of German origin.


When Carl Heinrich Weber's marriage to a Jewish woman was frowned upon by the royal court at Koblenz, he thought it fitting to leave Germany. He came to America in 1834 and settled in St. Charles with his wife and family of five. At about the same time, [Gottfried] Charles Balmer left his home in Mühlhausen and moved to Philadelphia, finally arriving at St. Louis in 1836.

In 1840, Balmer married Therese Weber, their home subsequently becoming the center of the city's musical life and hosting the likes of Henri Vieuxtemps, Ole Bull and Louis Moreau Gottschalk. In 1848, in partnership with his brother-in-law, Balmer opened a music store at 141 Market Street.

Eventually, lack of efficient leadership brought about a let-down in publishing activity. The rise of Shattinger, Thiebes-Stierlin, and Val Reis resulted in a decline in music sales. In 1907 Balmer & Weber sold their catalogue to Leo Feist of New York.

This page is under construction.

Balmer & Weber plate numbers were issued without a prefix, initially in an irregular and contradictory manner. The historian Ernst Christopher Krohn — who was working on an unfinished catalogue of the firm's plate numbers at the time of his retirement — asserts that in 1853, plate numbering became "reasonably regular and actually chronological."

The use of the same plate number for multiple compositions may have been due to carelessness. Dates in italics are estimated.