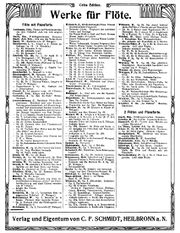 In 1855 Carl Friedrich Schmidt took over J. D. Claß's bookshop in Heilbronn am Markt and soon began specializing in the sale of music scores and books and publishing sheet music. The late nineteenth century and early twentieth centuries appear to have been the firm's most prosperous time. Most of the C.F. Schmidt scores on this site date from the 1890s to the 1920s. In the 1890s the firm began using the imprint Cefes edition, perhaps to distinguish itself from the publishers Arthur P. Schmidt of Boston, with a branch in Leipzig, Schmid Nachfolger of Munich, and Wilhelm Schmid of Nuremberg.

As for the type of repertoire it published, in addition to violin works (see cover of Chopin Etude, Op.10 No.3 ), the firm had an unusually large catalog of pieces for viola (see the cover pages of Oscar Jüttner's Legende) including many arrangements by Ludwig Pagels. In common with A.E. Fischer of Bremen, wind instruments were also well served, especially the clarinet (see the cover of the clarinet part of Heidrich's Trio, Op.33), including most of Robert Stark's works, the flute, especially works of Paul Wetzger, Friedrich Kuhlau, Jules Demersseman and Rudolf Tillmetz (see the cover of the piano score of Holzhaus' Tarentelle above) and oboe (see cover of Friedemann's Ehestandsgeplauder). Equally, the horn was far from being ignored: see the cover of the Kudelski concertino.

In 1989 the Schmidt family sold the publishing company and in 2011 the firm was acquired by Thomas Eugene Schneider and the company headquarters was relocated to Bad Aibling, a spa resort in southern Bavaria.

Schmidt's plate numbers were issued in a regular chronological fashion. Plate numbers are in the format of C.F.S. ####. Dates in italics are estimated.