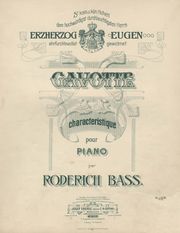 In the early 1900s there were two quite separate music printing businesses (which also had interests in music publishing) trading under the name of their founder, Josef Eberle (1845-1921). The earlier company of 'Jos. Eberle & Co.' was established in Vienna ca.1873. By 1888 it was located in Seidengasse, printing music and manuscript paper, and also acting as a publisher of music, issuing technical exercises, and editions of the classic repertoire. Later, in the 1890s, the firm acquired the publication rights to a number of symphonies and other works by Anton Bruckner although they were actually distributed under the imprint of Doblinger.

As a respected and innovative lithographic printer Eberle was invited to join the board of a new corporation in 1892, the Erste Wiener Zeitungs Gesellschaft (EWZG). Two years later sold his business to the larger company: his firm's name was retained as a trading name for the specialist business (particularly music printing) it undertook and Eberle remained on the EWZG board to manage its activity. The following year EWZG purchased another printing firm, founded by Rudolf v. Waldheim (1830-1890), but in the years that followed the EWZG board sought to merge the operations of both specialist departments and this evidently lead to tensions in the senior management team and the resignation of Eberle in January 1898. Within a matter of months he had re-established himself in a separate new business as a letter-press and lithographic printer, with premises at 38 Schottenfeldgasse and trading under name 'Josef Eberle', and was soon printing and publishing music (including some of the early works of Franz Schreker, although most of his new catalogue consisted of popular repertoire) and again manufacturing manuscript paper. In 1903 Josef Eberle bought the music-selling business and premises of Albert Jungmann & C. Lerch, a firm that could trace its history back to C.A. Spina (for whom Eberle's first business had been a supplier of lithographed title-pages in the 1870s) and through Spina directly to Diabelli & Cappi (founded in 1818). Interestingly, though, it was the historical link to Spina that Eberle chose to use in his advertising and his title page imprint. After Eberle's death in 1921 this second firm passed to his widow and daughters and the printing side of the business continued until at least the early 1980s.

Meanwhile, in 1898 EWZG had acquired the publishing rights to a number of works by Gustav Mahler, including the first four symphonies (distributed under the imprints of Josef Weinberger or Doblinger) and three years later (1901) the company was one of the consortium of music-related businesses, banks and individuals that established Universal Edition. EWZG's music department remained that company's music printer until 1960. When in 1905 the EWZG decided to sell its newspaper publishing business the company's name was changed to: 'Druckerei- und Verlags-Actiengesellschaft, vorm. R. v. Waldheim, Jos. Eberle & Co', a cumbersome formulation that at least had the merit of referring to the two best-known trade names associated with the corporation: it was formally reduced to the more manageable 'Waldheim-Eberle A.G.' in about 1915, though this short form had been used unofficially even before 1906. After the German annexation of Austria in 1938 the firm was aryanized and taken over by M. Müller & Sohn. Waldheim-Eberle closed in 1974.

Works published by Eberle (as opposed to those the firm printed for other companies) included a plate number in the format of J.E.####.