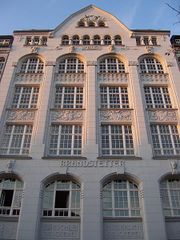 Main office building, bearing the Brandstetter name, 1906 (still in use)

Oscar Brandstetter has been a major Leipzig printer for nearly 150 years, outlasting most of its competitors.

The company had its origins in the Leipzig-based publishing company founded by Friedrich Wilhelm Garbrecht (d.1874) in 1862. Oscar Brandstetter acquired and renamed the company in 1880. Otto Säuberlich (1853-1928) was the link between the two companies. He was a junior clerk in Garbrecht, organised the sale to Brandstetter, and became Prokurist (chief administrator) in the new firm. He was also related by marriage to the new boss, since his wife was Brandstetter's sister-in-law.

Oscar Brandstetter introduced many revolutionary printing technologies, which helped the firm, like its competitor C.G. Röder, to grow rapidly, and by 1939 the firm employed nearly 2,000 people. Between the wars it became both a printer and a publisher, by acquiring Tauchnitz, Jakob Hegner, and Verlag der Juristischen Wochenschrift J.W. Moeser.
Damaged during World War II, the firm's facility was disassembled and expropriated. Wolfgang Brandstetter, the founder's son, re-established the company in Wiesbaden where it currently specializes in technical and scientific publications. However, the harp in the firm's eagle logo is a reminder of Brandstetter's musical past.