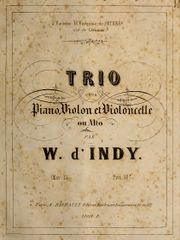 Founded in 1805 by Charles Simon Richault (1780-1866), who apprenticed with the Paris publisher J. J. de Momigny. Richault's first known address was 7 Rue Grange Bateliere. Richault moved his premises to 16 Boulevard Poissoniere between 1823 and 1825, with a shift (or perhaps a re-numbering) to 26 Boulevard Poissoniere in 1841. Richault acquired the publishing firm of J.J. Frey in 1839(?).

Dates in italics are estimated dates.
Richault plate numbers are not purely sequential. According to Devriès and Lesure: 1) blocks of numbers were sometimes reserved for certain publications; 2) different series of numbers ran concurrently; 3) old numbers were reused if the former publication was taken permanently out of the catalog.
Some assumptions on dating can be made, but it is best to verify the year of publication with a catalog or reference source.

Plate numbers in the format of ###(#) R. but obviously published much later than when the regular series was in the ### range. Several of these appear to have been issued at or at about the same time by Hofmeister in Leipzig.