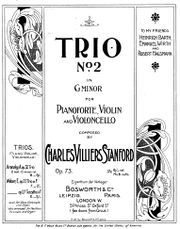 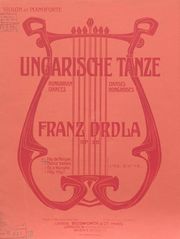 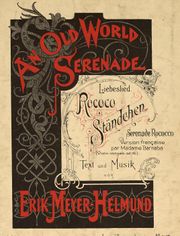 In spite of the English name, this was a German publishing company in Leipzig, that specialized in popular music. On the other hand, there was a strong initial connection to England: the firm was founded in 1889 in Leipzig by the Englishman Arthur Edwin Bosworth (1858–1923), on the initiative of the Chappell company of London.

The reason for this venture was the weak state of intellectual property laws in those days. Chappell, the publisher of the Gilbert and Sullivan operas, established the company in order to get Austrian and German copyright protection for its valuable properties, and in fact Bosworth's first publication was the vocal score of The Gondoliers. Bosworth and Chappell put up the initial capital, but Chappell took no part in the management, leaving it all to the adventurous Bosworth, whose main deficiency was a lack of German language. Fortunately, Bosworth found an energetic local partner in Carl Kratochwill, and between them they created one of Europe's major popular music companies. In fact, the business quickly expanded beyond Gilbert and Sullvan.

After securing popular successes in song, dance, and operetta by Alphons Czibulka (Songe d’amour Op.356, 1890), Erik Meyer-Helmund (Rokoko-Liebeslied 1895) and Carl Zeller (the operetta Der Vogelhändler) the firm began to expand operations beyond Germany, opening four additional branches over the next 25 years, of which the Vienna branch (1902) was the most successful. A policy of expansion through acquisition of smaller publishers brought the catalogs of Wilhelm Aletter of Berlin (1896), Eduard Ebner of Ludwigsburg (1897), and Heinrich Petersen of Leipzig. The Petersen acquisition contributed significantly to the firm's catalog of educational works. A further prize in the educational field was Sevcik's violin studies.

The move to Vienna took the form of the buyout of the bankrupt firm Vinzenz Kratochwill Ltd. The timing was fortunate as Viennese dances, operettas, and songs were reaching their peak of worldwide popularity. Among the popular composers of the time were Alphons Czibulka, Alfred Grünfeld, Karl Komzak, Carl Millöcker, Eugen von Taund and Albert Gortner. Bosworth gained the exclusive rights to works such as the operetta „Zur indischen Witwe“ by Oscar Straus and the ballets of Oskar Nedbal. Further acquisitions in Vienna, such as Julius Chmel, made Bosworth a natural choice for the last great Viennese operetta composer Franz Lehar. Local dialect songs and zither music were also in the catalog, which grew to 30,000 titles by 1914.

After Arthur Edwin Bosworth's death in 1923 his sons Laurence Owen Bosworth (1886–1952) and Arthur Ferdinand Bosworth (1893–1959) took over the company. They continued acquisitions, buying the Berlin firms Lyra and Roehr, and the Viennese firm Blaha. Roehr A.G., bought in 1934, contributed many popular Berlin songs of the 20s, such as „Wenn der weiße Flieder wieder blüht“, „Man schenkt sich Rosen, wenn man verliebt ist“, and „Heut war ich bei der Frida“. For its part Blaha, bought in 1939, supplied a wealth of Viennese popular songs by Ernst Arnold, Roman Domanig-Roll and Franz Paul Fiebrich, marches by Fucik and waltzes by Komzak. The two great innovations of the 1920s were the growing influence of American songs and musicals and the role of music in movies and on the radio. Bosworth also got the British rights to Steingraeber’s publications. The late 1930s were difficult times for all German music publishers, with a ban on publishing Jewish composers' works, and restrictions on exporting to enemy countries. Then in the war both the London and Leipzig premises were destroyed by aerial bombing. After the war the Leipzig office moved to Cologne (1948) and business was resumed. In 1998, Bosworth was absorbed by Music Sales Group, and in 2018 Music Sales sold its printed music division to Hal Leonard.